The Middle East and North Africa (MENA) is currently witnessing some of the true consequences of climate change . . .   and has already been doing so for some years.  More frequent and severe flooding from torrential rain and rising sea levels is causing losses of business and property to rise year-on-year.

As the region is generally one of the world’s most arid, and not used to sudden significant precipitation, the impact of flooding can be particularly severe.  Heavy rain cannot easily be absorbed by ground baked hard by the sun.  The region has not developed, or needed, the drainage and associated infrastructure to cope.

In Europe, North America, Asia and Australia, where heavy rain is a common occurrence, physical defences and emergency response plans have been long established to mitigate against any such threat. A number of countries also benefit from well-funded government supported flood insurance pools or schemes. MENA’s governments need to do the same to prevent heavy financial losses as weather conditions change and the cadence of severe weather occurrences accelerates.

The financial cost of flooding

The high concentration of urban developments springing up across the region, particularly along coastal areas, presents a specific susceptibility to flash floods.  These are often generated in mountainous areas, with the water rapidly flowing downstream via wadi systems and flooding large settlements.

Many cities, including Cairo, Kuwait, Riyadh, Casablanca, Alexandria, Doha, Guelmim, Muscat and Jeddah, have suffered major flood damage in the last decade and the financial impact on businesses and communities has been huge.

Globally, flooding accounts for one third of economic losses from natural catastrophes.  It’s not just the economic damage sustained from the initial event but also the long-term impact as communities struggle to recover and resume operations.

It’s not limited to built-up areas either.

Governments, city planners and developers need to act now to raise awareness of this increasing risk and take steps to build and improve their defences against such events.

Insurers are adopting a more cautious approach to flood risk; understandably, given the large losses they have suffered in recent years.  Such is the extent of the problem that many are imposing sub-limits for flooding on their policies, whereas previously they provided blanket coverage for all weather-related risks.

Risk surveyors and adjusters are also increasingly taking into account flood exposure when carrying out their site surveys and inspections of properties.  A couple of inches in water level can mean the difference between a significant loss or none at all, so therefore, risk needs to be regularly assessed to reflect the ever-changing environmental conditions.

A key solution to the problem is flood mapping.  Essentially this is a technique used to identify areas at risk of flooding, the likelihood and extent of them being flooded and the impact it may have on buildings, communities and the landscape.

The issue in MENA, however, is that there is minimal historical loss data to analyse and, given the unpredictable nature of these new events, it is hard to produce an accurate mapping that covers potential risks, many of which did not even exist years ago. Then there is a lack of access to high-resolution maps for morphology and land use catchment characterisation.

Despite these challenges, some advances have been made in flood mapping of the region, thanks to high-resolution satellite imagery.  For example, in the Zat watershed in Morocco, two validation methods were used to assess the accuracy for simulating rainfall and run-off processes, despite data scarcity.[2]

Similarly, a new flood hazard map was developed for El Bayadh city in Algeria.[3]  Such methods can be more widely applied to develop flood models for semi-arid basins across the region.

Modelling can also be used to determine flood risks in areas of rapid urbanisation, such as the far western region of Muscat city and governorate,[4] where a 3D interactive hydrodynamic model has been used to produce an updated flood map of the region.  This shows the effect of a recent urban development on the flow and flood patterns, and the changes in flooding hot spots.

Jeddah is another prime example of a built-up coastal city where the flood zones have been mapped.[2]   By combining optical satellite imagery, radar digital elevation models, topographic and geological maps, rainfall records and available statistical data, the main flood risk areas were identified to provide key decision-makers and planners with the tools to manage their urban spaces more effectively.

Ultimately, flood mapping can help to not only reduce losses and improve risk mitigation, but it also enables underwriters to more accurately assess and price the risk.  That can allow policyholders to reduce their premiums or to obtain coverage they were previously denied if their exposure was deemed not to be a risk or less of a risk after all.

Better understanding of flood risk alone is not enough; it must be factored into the design and construction of new housing and infrastructure.  Protective barriers, such as dams and levees, or water retention basins and channels, which disperse or divert flood waters, can be incorporated to protect properties at risk.

However, all of these risk mitigation tools need to be carefully considered as part of a wider water management strategy, which also seeks to preserve water for human use, particularly in arid regions.

In addition, flash flood warning systems should be installed to warn residents and road users of the danger.  Awareness and information campaigns should also be created to advise people what to do and areas to avoid in the event of a flood.

The Internet of Things (IoT) and ‘smart’ technology, such as flood depth monitors, are now enabling the use of parametric underwriting to price individual flood perils more accurately.

At this stage these solutions are almost exclusively restricted to mature markets where mapping is well developed, enabling results that have a certain level of confidence.

With the global sea level projected to rise by two metres by the end of this century and increasingly more extreme and unpredictable weather events happening every year, flood mapping will be a vital tool in the risk management of MENA’s cities and large urban settlements.

One such initiative has been led by JENOA, who recently partnered with market-leading modelling and analytics organization RMS, to provide detailed flood maps across the MENA region for its customers. 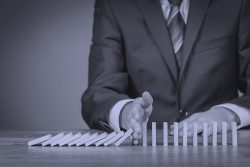